Stinky tofu finally gets a counterpart

While corn, tuna, shrimp and mayonnaise are commonplace atop pizzas in China, the country may have finally reached the final frontier of pizza toppings: durian.

For those who haven’t had the pleasure of dining on durian, its most notable trait, aside from doubling as a deadly weapon, is that it has a really pungent smell. Like a combination of old cheese and stinky feet, it isn’t particularly inviting. Much like stinky tofu, durian is better to eat than to smell, and if you’re unfamiliar with stinky tofu, know it’s not called “stinky” for nothing. 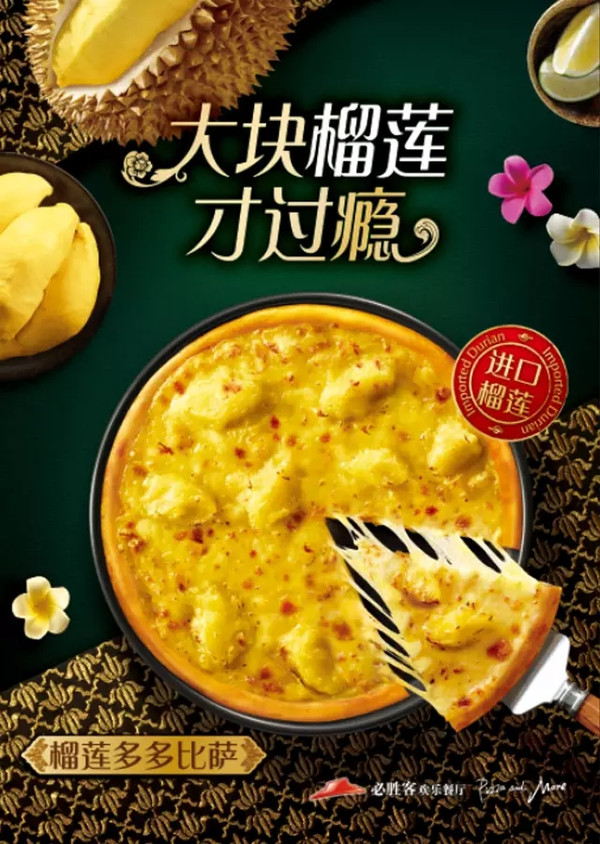 Although durian has been dubbed “King of the Fruits”, it isn’t widely used in Chinese cooking. Its exorbitant cost makes it difficult to cook with, but it’s occasionally found in pastries.

Wrongly maligned and unjustly misunderstood, Pizza Hut hopes to set the record straight with its “Durian Duoduo Pizza” in cities like Beijing and Wuhan.

Pizza Hut’s durian pizza is all about keeping it simple. It comes with two toppings: durian and mozzarella cheese. The idea being that the cheese will melt with the chunks of durian, creating a thick, gooey pulp that makes it difficult to see where the durian starts and the cheese ends.

Of course, if simplicity isn’t your thing, you can always try out other Pizza Hut varieties. The seafood pizza includes beef, salmon, fried breaded shrimp, pineapple, bacon, and sausage.

But the innovation doesn’t stop there. A Pizza Hut-knockoff called “Pizza Care” is offering something that can only be described as pizza dough baked in the shape of an ice cream cone and then filled with cheese and toppings:

Are you ready to indulge your wildest pizza desires? The 9-inch durian pizza is selling for RMB 71 at Pizza Hut. For a limited time.

If You Dine At KFC or Pizza Hut, You Might Eat Expired Meat

Propaganda Cartoon Warns Chinese of the Dangers of Dating Foreigners

Laowai spies use gifts and affection to get what they want

Man Electrocuted to Death After Charging Phone at Internet Bar

Shocked after touching the USB cord

When It Comes to Sex Toys, China Is Stiff Competition

China to usher in new wave of orgasms

She is undergoing medical treatment

Newest Version Of Opera Browser Includes Free, Built-In VPN To Get Around The GFW

Share the post "Newest Version Of Opera Browser Includes Free, Built-In VPN To Get Around The GFW"

To meet supply and demand