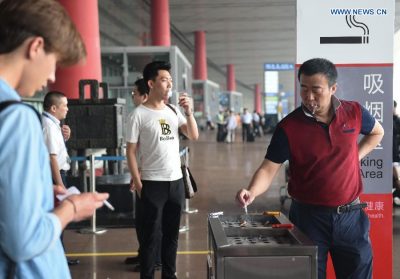 Shanghai is the latest in an ever-increasing list of Chinese cities to completely ban indoor smoking.

Starting in March of next year, smoking will not be permitted in the any of the city’s indoor public venues, workplaces and public transport sites. The indoor smoking ban includes all Shanghai hotels, restaurants, offices, airports and railway stations, and entertainment venues.

The amendment to Shanghai’s 2009 smoking control regulation will shut down all designated smoking areas and rooms permitted under the current law in Shanghai hotels and restaurants.

Additionally, the new law will extend the smoking ban to outdoor areas where children are likely to be present. Smoking will be banned in outdoor areas belonging to primary schools, kindergartens, children’s hospitals, historic venues, sports arenas, and public transport waiting areas.

However, for smokers who simply cannot quit, designated outdoor smoking areas will be arranged near public venues, workplaces and transportation facilities.

Fines for violators remain unchanged from before. Individuals caught breaking the ban will be given a fine of 50-200 yuan ($7.34-$29.4) while companies may be hit with a 30,000 yuan penalty.

The arrival of Shanghai’s indoor smoking ban has been long-rumored, with Beijing and Guangzhou having already implemented full smoking bans of their own.

Last year, a survey of over 25,500 people conducted by the Shanghai Health Enhancement Commission found that 93 percent of Shanghai residents favored a smoking ban in indoor public areas. However, a poll from last year suggested that 47 percent of Shanghai workers still smoke on the job.

China has 316 million smokers, exposing some 740 million people to second-hand smoke. In 2015, about 733,000 Chinese were diagnosed with smoking-related illnesses including lung cancer.