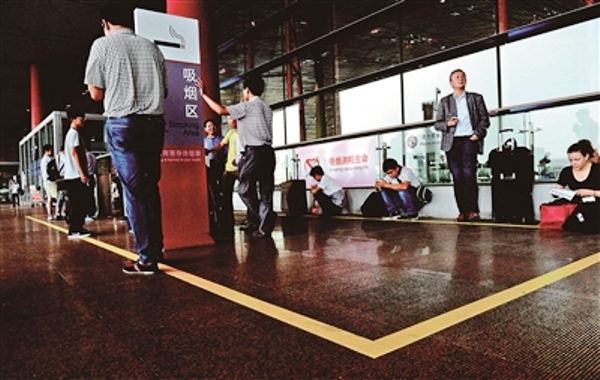 Shanghai’s two airports have announced plans to impose a smoking ban effective at the end of the month.

All indoor smoking rooms at Shanghai Hongqiao Airport and Shanghai Pudong Airport will be closed and passengers at both airports will be directed to use designated outdoor smoking areas.

A revision to Shanghai’s March 2010 anti-smoking regulation proposed this past summer will ban smoking in all public locations, workplaces and public transportation areas. The ban is expected to come into force by the end of the year.

Under the current regulation, smoking is banned in 13 public areas, including primary schools, kindergartens, and children’s hospitals. Restaurants with 75 seats or more, and businesses over 150 square meters in size, are currently allowed to designate smoking and non-smoking sections. Under the revised regulation, restaurants and businesses will no longer be allowed to have designated smoking and non-smoking rooms.

Smokers who violate the smoking ban will be fined between RMB 50 and 200. Facilities that continue to provide smoking rooms to clients will face a fine of RMB 50,000.

Some Shanghai residents are less than impressed with the new regulations. A poll suggests that 47 percent of Shanghai workers still smoke on the job, and slim menthol cigarettes have become fashionable among smokers as a “healthy alternative” instead of quitting.

China has 316 million smokers, exposing some 740 million people to second-hand smoke. In 2015, about 733,000 Chinese were diagnosed with smoking-related illnesses including lung cancer.

16 Chinese cities have passed anti-smoking regulations. Beijing’s smoking ban from 2015 has been considered such a success that plans are being drawn up to implement a nation-wide smoking ban.

Prepare for Delays: Shanghai Airports Beef Up Security Ahead of G20