Started jianbing business after a trip to China

A food stall in Portland, Oregon, USA that has found great success selling “authentic Chinese wraps” is now coming under fire by Chinese media and netizens for “stealing Chinese culture”.

Alisa Grandy, the founder of the Bing Mi! food stall, became successful after she learned the “secret technique” of making jianbing, a popular street food in China that is like a folded egg crepe containing meats and a crunchy fried center. Grandy is reported to have “stolen” this part of Chinese culture after a visit to Tianjin last year.

She’s selling the jianbing for $6, approximately six times what it costs in China. 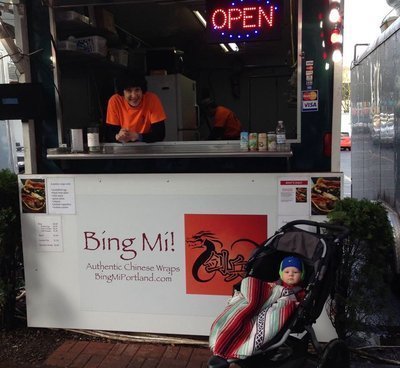 Bing Mi! has become a sensation in the food community in Portland, drawing wide acclaim from local media that call it “funky and flavorful“, “Asia’s breakfasty answer to the Crunchwrap Supreme“, and “flat-out fantastic“.

Other netizens had a different take on the spread of Chinese culture abroad. “So… yet another intangible cultural heritage of China has been taken out of the country. Should I go abroad and sell baked sweet potatoes?” And then another netizen poetically wrote, “The flower blooms inside the wall, but it is most fragrant outside it.”

On her website, Grandy writes that she was inspired to make and sell jianbing after a trip to Beijing, but that she learned how to make them from YouTube.

A similar story occurred in 2014 when a Seattle woman with her own jianbing food stall called “Bing of Fire” was also accused of stealing Chinese culture. The woman had been teaching English in Huzhou, Zhejiang for a year and a half when she finally learned how to make jianbing after having “endured grueling research”.

A jianbing shop also closed in Hong Kong last year. It was selling jianbing for HK$48, even more expensive than Grandy’s.

Duped by the "University of Northern New Jersey"

Accident occured while posing by tracks

When It Comes to Sex Toys, China Is Stiff Competition

China to usher in new wave of orgasms

Guangzhou Chengguan, Eager to Clean Up the Place, Start by “Arresting” Ronald McDonald

Statue broken off at the ankles and carried away

Taiwan Lifts Punishment For Those Altering Passports With “Taiwan” Stickers

Had recently completed sale of house worth over $1 million

Yet another foreign architect's design disliked by China